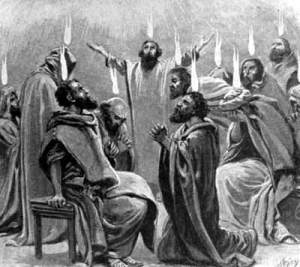 “On one occasion, while he (Jesus) was eating with them, he gave them this command: “Do not leave Jerusalem, but wait for the gift my Father promised, which you have heard me speak about. For John baptized with water, but in a few days you will be baptized with the Holy Spirit.”

“But you will receive power when the Holy Spirit comes on you; and you will be my witnesses in Jerusalem, and in all Judea and Samaria, and to the ends of the earth.”

The Baptism of the Holy Spirit gives us power to live a Godly life as we receive power to be witnesses. We do not receive power to be attorneys, to be prosecutors or to be judges. We received power to have the ability to be eyewitnesses of the Lord and testify of His doings. That power is available for us all! So then we come to Acts 2 as we see 120 people being baptize in the Holy Spirit; it was indeed a dramatic event. In Acts 2:12 we see the following:

“Amazed and perplexed, they asked one another, “What does this mean?”

The Apostle Peter answered this question by quoting Scripture; in Acts 2:16-18

It is clear that this is a powerful experience apart from salvation. Speaking in tongues is just an outer manifestation of what is happening inside in the life of a Christian. I see in Scripture that the people that were baptized in the Holy Spirit also prophesied. Later we see in Acts 19:1-7

“While Apollos was at Corinth, Paul took the road through the interior and arrived at Ephesus. There he found some disciples and asked them, “Did you receive the Holy Spirit when you believed?” “They answered, “No, we have not even heard that there is a Holy Spirit.” So Paul asked, “Then what baptism did you receive?” “John’s baptism,” they replied. Paul said, “John’s baptism was a baptism of repentance. He told the people to believe in the one coming after him, that is, in Jesus.” On hearing this, they were baptized into the name of the Lord Jesus. When Paul placed his hands on them, the Holy Spirit came on them, and they spoke in tongues and prophesied. There were about twelve men in all.”

Many people today are just like these men. Many people are not being taught about this powerful experience. Others, as always, are being fooled into something that has nothing to do with being Baptize in the Holy Ghost. Foolishness, however, should not take away the truth of God’s Word. The devil comes to steal, kill and destroy according to John 10:10 and he is robbing God’s people from this much-needed power to testify.

For centuries, the enemy use the Catholic Church to give us a false Gospel; it was not until the seventeen hundreds with the great reformation, that the true Gospel revelation was given to the world through the Great Awakening. That is how we became Protestants, as we protested their foolishness. But the Baptism in the Holy Spirit was ignored until the start of the 20th century through Evan Roberts and the Welsh Revival and William J. Seymour and the Azusa Street Revival. During the Azusa Street Revival we see reports of people not only speaking in tongues, but also learning new languages. The new language they learned was taken as a mandate from God to be a missionary to that nation; so they were send out to go to those nations. It was amazing! Blacks, Whites, Hispanics and people from all over the world came together as a big family. They came together by the power of God’s Spirit and racism was not an issue. Later, however, racism was the very thing that destroyed this revival.

Tragically, the enemy has attacked the Pentecostal movement and there is no other denomination more deeply divided than Pentecostals. However, again, we can’t take the failure of men and use it as a reason to disregard something that is Biblical. The Baptism of the Holy Spirit is Biblical, is real and is needed. May the Lord use us to preach the Gospel, may the lost get saved; may the Body of Christ embrace sanctified life styles by the power of God and may we all be baptize with the Holy Ghost.

Why do I Write?

An independent thinker with a profound call to see the orthodoxy of the church and passion for Christ manifesting together. The Alaskan frontier was foreign to Angel when in 2012, he moved his wife and six children across the country all the way from the east coast. In fact after he was born in Brooklyn, New York, he was raised on the beautiful island of Puerto Rico where he earned his B.S. degree in Sociology with a minor in Education from the Inter American University in San Germán. He then moved to Jacksonville, Florida, where he began his now twenty-six-year career in social services related jobs. His first job was working with foster-care children in the capacity of youth care worker; group Home supervisor, legal caseworker, and program director. Later, Angel worked as a social worker, family development liaison, and case manager. While making a difference in the lives of foster children, Angel served concurrently in ministry for eighteen years in diverse ministries such as, men’s ministry director, worship leader, prison ministry director, chaplain, counselor, Elder and senior pastor with credentials with the Assemblies of God. Angel has published two books. When not ministering, writing, and helping others, Angel can be found living the Alaskan lifestyle in the winter and grilling, barbecuing, hiking, golfing and riding his bike during the summer months. Angel is currently the Shelter Manager and Genesis Lead Counselor at the Fairbanks Rescue Mission. He is also an active member at True North Church where he serves in the Prison Ministry.